A latest report by People Management indicates many more staff appraisals took place in the NHS in 2010 than previously, as indicated by the latest NHS staff survey.

The survey, covering 165,000 NHS workers, found that 77 per cent of staff received an appraisal in 2010, up 8 per cent on the previous year. Staff were more likely to be pleased with the support they were receiving from managers, with managers given an average rating of 3.65 out of 5, up from 3.63 in 2009. 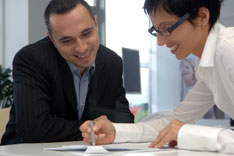 An improvement was also noted in the perceived fairness and effectiveness of reporting procedures. On the negative side, only half of staff (down 53 per cent) said they would recommend their trust as a place to work, down 2 per cent, while 29 per cent said they suffered from work-related stress.

Dean Royles, director of the NHS Employers organisation, said: “Employers are clearly working hard in partnership with their health unions and staff to continue improving the NHS in these challenging times and this year’s NHS Staff Survey shows that these efforts are paying off.

“We are pleased with the survey’s finding that over three-quarters of staff now receive appraisals and this is the highest ever. Existing research has confirmed the strong relationship between appraisals and a good standard of patient care.

“Year on year the NHS Staff Survey has reported overall improvements and it is important to understand existing areas of concern, such as the one per cent increase in work-related stress, within this context. The NHS Employers organisation is supporting trusts to target areas of concern and further improve areas that are strong with developments such as our online resource for best practice called NHS well-being at work.”