A report on the BBC News today reports that the UK labour market faces a “slow, painful contraction” with firms delaying recruitment of more staff, a key report suggests.

A separate Barnardo’s report said jobless teenagers were being “ignored”. It found employers adopting a “wait and see” policy towards the economy. This involved reduced recruitment as well as fewer redundancies.

The number of UK employers planning to outsource work overseas or hire migrant workers had also fallen substantially in the last three months, the survey found.

The CIPD said the employment situation could worsen if the eurozone crisis thrust the world back into recession. CIPD public policy adviser Gerwyn Davies said: “The good news resulting from this lull in business activity is that fewer employers are looking to relocate abroad or make redundancies. 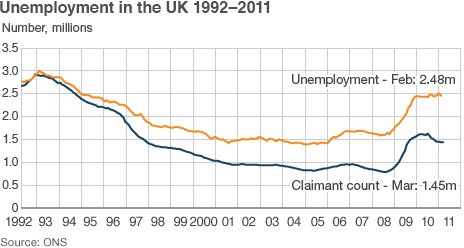 “The downside is that recruitment intentions are falling, which will make further rises in unemployment therefore seem inevitable given that public sector job losses are outpacing the predictions made by the Office for Budget Responsibility. “There is no immediate sign of UK labour market conditions improving in the short or medium term.”

Monday’s report comes two days before the latest official unemployment figures are expected to show that jobless 16 to 24-year-olds total more than a million. Last month, the CIPD reported that the public sector had been shedding jobs at five times the rate previously predicted by the Office for Budget Responsibility (OBR).

The think tank called on the government to “call a halt to public sector job cuts while the economy and labour market remain in the current fragile condition”. But the Treasury said “risks in the global economy make it even more essential to stick to the government’s essential deficit reduction plan”. It insisted that private sector job creation would substantially outweigh the public sector cuts by 2015, according to the OBR forecast.